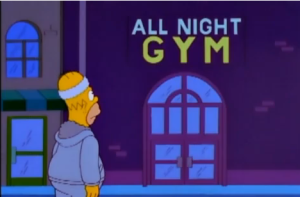 Two days ago we joined a gym, and I realize that this next part might not seem entirely truthful, but I couldn’t be happier. My wife’s wanted to join a gym for quite some time, but it never felt like a good idea. Conditions were not ideal and I had my own hangups.

Growing up overweight, I’ve been familiar with the concept and importance of fitness my whole life. I played basketball and baseball in elementary and middle school, but then switched to football during my high school years. I continued playing football for two years after high school at Santa Rosa Junior College, and it was during this time that I got in the best shape I’d been in for a long while. During off-seasons I lifted weights and conditioned five days a week. By the start of my second season, I wasn’t at my lightest weight, but I was stronger and faster. Speed and muscle anchored with a lineman’s gut.

After quitting football, I fell fast and hard into a pit of unhealthiness. I stopped exercising, but continued to eat like I was playing football full time. I also started smoking and drinking more frequently. These habits developed in Santa Rosa, but continued to grow in San Francisco when I transferred to the state university there. Sedentary living and late night binge eating traveled with me to Portland to such a degree that when I moved back to California in the winter of 2009, I was actually over the 300 ibs. mark. And I think the only reason I didn’t weigh more was based solely on the fact that shortly after moving to Portland, my car died, forcing me to bike to and from work (roughly 12 miles each day).

I tried Weight Watchers for about a year and a half, and this program helped me get the initial load of weight off–I dropped close to 60 pounds. But after I quit the program (I wasn’t going to meetings, nor following the system with fidelity, so it seemed a waste of money), I spent the next few years putting weight back on and then taking it off.

Last summer, I rigidly began the slow carb diet outlined in Tim Ferriss’ 4 Hour Body book. I cut out sugars and enriched foods, eating only legumes, vegetables, and proteins. I ate this way six out of seven days, and then on the seventh day I was allowed to cheat, meaning I could eat whatever I wanted, because the science behind the diet indicated that spiking the blood sugar once a week helped the metabolism. But as the year wore on, it became tiresome to eat this way, and my cheat days became cheat weekends, which occasionally transformed to cheat weeks, depending on the holiday and/or family visits. I didn’t put all of the weight back on, but I did add about ten pounds to my frame.

So when my wife approached me, adamant about joining a gym, I was ready to comply.

Why the hesitation whenever she’d asked before? I think it had a lot to do with past experiences with gyms. When I had memberships before, I rarely went, essentially wasting my parents’ money. Because I failed to go when I was younger, I made myself believe that as an adult I wouldn’t go often enough to validate the money spent.

But now I want to go to the gym. I had my first physical in five years last week and the doctor told me what doctors have been telling me since I was a kid: lose weight. I knew that walking in. When you’re overweight, you expect to hear this in a doctor’s office, and I suppose the guy wouldn’t be doing his job if he didn’t say that. Still, part of me wanted to yell, “I KNOW I NEED TO LOSE WEIGHT! DO YOU THINK I’M BLIND? THANK YOU! I NEVER WOULD HAVE SOLVED THAT MYSTERY IF NOT FOR YOUR EXPERTISE! ALLOW ME TO BOW BEFORE THE ALMIGHTY TEMPLE OF MEDICINE!”

I’ve only gone two days but already exercised more than I have in a long time. And I’m only there for 30 minutes. I just try and get my heart rate up and keep it there for a half hour and I walk away feeling good.  I’m sure there’ll be days when I don’t want to go, especially when winter drags its bastard blanket across our state, but I think establishing this habit now will carry me through. The trade-off is too valuable, especially now that I’ve embarked on the path of a writer, or one who sits for a living. If my career is sedentary then I need to exercise. Heart disease and diabetes run in my family and I want to be around for a long time, so I’ll continue to ride, step, and elliptical (?) in a well-lit, windowed room featuring mounted flat screens and the smell of both enthused and reluctant determination.

Ryan L. Purdy is a high school peer coach, biscuit enthusiast, and a wizard of huzzahs. He resides in central Minnesota with his wife, their three children, and a couple of dogs. He earned an MFA in Creative Writing from Augsburg University, and his work has appeared in Talking Soup, Barstow & Grand, and Volume One. View all posts by RLPurdy