Minnesota’s experienced some interesting weather this winter, running the gamut from one extreme to the other. Snow has fallen, and frozen, temperatures dipped well below zero, and last week low 40s made an appearance, doing their damnedest to thaw out the aforementioned frozen snow, or ice–although it should be noted that this “ice” appears as snow on the surface, only revealing its true nature during morning/evening dog walks or days when I’m running late for work.

But after the incongruously warm weather of last week, Winter has returned in true fashion, dumping snow on the Land of Lakes. Not heavy snow. Just steady. Enough to make traversing the backroads a bit more dangerous. Enough to warrant shoveling the drive in the afternoon and then again at 5:00 the next morning after the plow’s come by, piling and packing a foot-and-a-half tall wall of white at the foot of the drive. Despite all of this griping, I like the snow. It still has a magical quality as it flutters and drifts toward the earth, a quality that dissipates as the winter wags on into spring.

Enough about the weather.

I’m just coming out of one of the busiest times of the year, for me. I coach the One Act play at the high school; this year we put on Alan Haehnel’s Nora’s Lost. We’ve been rehearsing since just after Thanksgiving, and everything tends to ramp up during January. The students put in some solid work and produced a great play. We didn’t do as well at competition as we hoped for, but it’s not necessarily about competition. I think the students had a good time and put on a good show. Today, they gave an encore performance for the rest of the school to see; it was well-received, so hopefully we have more students come out for the play next year. Sadly, I’m losing a solid amount of my cast and crew to pesky graduation this spring (Boo!).

In high school, I opted to play football, and never had the opportunity to take part in the drama program. It wasn’t until my senior year, that one of my best friends (who was a champion in the choir) talked me into trying out for Grease. I played Sonny LaTierre (the one Burger Palace Boy sans a vocal solo), and it was one of the best times I had during high school. I always wish that I had put myself out there and done more drama. The One Act play is a significant amount of time and energy…I missed out on a lot of time with my wife and girls, but it’s cool getting to work with students that want to actually do something, and who are willing to engage. So much of teaching feels like dragging kids toward some kind of finish line, so it’s refreshing when they’re headed there on their own volition.

My writing output has been close to nil. I’m working on a couple stories, trying to get a few words on the page each day, so that I don’t feel like a complete loser. The first story is about dueling roboticists–I know very little about robots or scientists, so essentially I’m writing characters the way I know how to, then tossing them into the world of robots. Huzzah! The second story takes place in a nursing home (setting inspired by the play the students put on…Hey! Art inspiring art) and superheroes are involved. I know where I want the story to go, I’m just not sure how to get it there…yet. The novel I worked on for NaNoWriMo is just sitting there on my hard drive, and I think I want to turn that into a comic.

But, Gus, you don’t know how to write comics. I know. I’m trying to figure it out. Reading a lot of sample scripts online or in the back of trades (when the writer graciously throws it back there). I think where I’m struggling with comics scripts is the page layout (oh…just the page layout…no big deal…just the skeleton for the story). Suppose I just need to read more comics. No problem there.

I’ve been listening to a new (to me) podcast, The Comics Cast Cast. The hosts get together, pick a book, dissect it a bit, then cast it as if it were going to be a movie. In listening to the show, I’ve been introduced to some cool books. First, Frank Miller’s Batman: Year One. 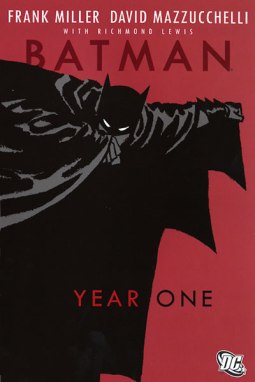 I’d seen the animated feature but never read the book. I love the story. It’s about Batman becoming Batman, but the narrative spends more time following Jim Gordon, showing the reader how the future commissioner arrives in Gotham City, Serpicos the hell out of the corrupt police department, and forms his partnership with the Dark Knight.

I read some of Aaron’s work years ago, when my roommate Andy brought home the trades for Scalped. SB reminds me a lot of a Drive-By Truckers record; reads like a simultaneous middle finger and a love letter to the South. The story’s so good; as I turned to the last page of Volume 2, I immediately wanted volume three. Not sure I can wait. Maybe I’ll have to read the single issues. Latour’s art work pairs perfectly with Aaron’s story. He uses a lot of reds and yellows, and browns in his color schemes.

I’m also involved with two different book clubs, and both seem to have two members. My first book club is with my wife. We’re rereading Jane Eyre by Charlotte Bronte. Despite living together, we meet sporadically, and I’ve fallen behind in the reading. My second book club is The Transcontinental Gentleman’s (Book) Club. I’m in this one with some friends in California. Our first book was Philip K. Dick’s The Man in the High Castle. We have a blog where we can post our thoughts about the reading. I finished this novel last night. There were a lot of parts in the book that I dug, but overall I was a bit underwhelmed. The story left me thinking, which is always good, but the latter half of the novel felt a bit rushed and disjointed. Dick wrote so many characters into the novel, so many different perspectives, that it felt (to me at least) that he struggled to close the circles on all of them. I’m looking forward to whatever we read next. Now that I’m done with that one, I can catch up in Jane Eyre.

My eldest daughter celebrated her fifth birthday at the end of January. Crazy to think she’s already five. So much has happened in the last five years, but it feels like the time passed too quickly. Feels like yesterday (truly) that I was holding this screaming, squirming red bundle in the early morning hours, and now she’s a little girl, who’s figuring out who she is. We have a lot of fun together. Recently, I’ve dug my old Star Wars figures out, and we’ve been playing together. We don’t necessarily play as the characters or act out the canonical stories, usually opting to act out what a family would do on a day-to-day basis (Darth Vader wakes up his children, Luke and Leia, fixes them breakfast, then runs errands); This also affords me the opportunity to show her that girls can like and play with toys or “action figures” marketed toward boys (sadly, she’s already aware of the gender division line in the realm of toys…she pointed out that her friend liked Ninja Turtles, but that she couldn’t like them because they’re for boys…might have to get the girl some Ninja Turtles).

One more thing (easy there Peter Falk), I went to an informational meeting for Augsburg’s Creative Writing MFA program and had the fortune to meet some current students and alumni; they were all nice folks, welcoming to their table, and giving me honest feedback about the program. Made me all the more excited for July and the summer residency. Realized I need to get on the stick with writing.

The play’s over. Life should start to rebalance. I’ll get to see my wife and kids. I’ll have more time to write (just need to steer clear of Netflix…oh, shit! What? They added Better Call Saul? Must fight the temptation. Send help).

That’s all I got for now. Be well. Be safe. Huzzah!

Ryan L. Purdy is a high school peer coach, biscuit enthusiast, and a wizard of huzzahs. He resides in central Minnesota with his wife, their three children, and a couple of dogs. He earned an MFA in Creative Writing from Augsburg University, and his work has appeared in Talking Soup, Barstow & Grand, and Volume One. View all posts by RLPurdy