Hello there. I’m penning this missive from a survival bunker deep beneath the earth’s surface, surrounded by massive stockpiles of freeze-dried and canned goods.

Truthfully, I’m in my well-lit, finished basement, plunking away at a keyboard, whilst sipping a mug of Sleepy-Time Tea (with echinacea), because I’m a real rebel/rock n’ roll type of guy.

I meant to write something after I voted last night. Something about marching into my polling location, and proudly and boldly casting my vote. But I didn’t. I had dinner with my wife and our girls. We had tacos. Not on purpose, though. We just happened to have tacos on the menu. I didn’t even eat the taco shells. Still trying to stay strong with this whole slow-carb food plan, so it was black beans, lettuce, cheese, and salsa.

Then as the election progressed, I was tempted to write. To chronicle my thoughts and feelings. My reactions. But I didn’t. I got caught up in hitting “refresh,” looking for the latest polls.

10:15 rolled around, and while I wanted to believe that Hillary would surge back, I knew in my heart of hearts, the Donald would win. So I stopped watching the polls. To continue to watch more and more states fall on the Drumpf side of the line would’ve been akin to a man facing a beheading, watching the executioner sharpen the axe.

When my alarm went off this morning, the first thing I did was check the news feeds (oooh, newsfeeds, sounds so sci-fi), and had my suspicions from the night before confirmed. The U.S. had elected Donald Trump as president.

And while I was bummed (and still am bummed to a certain degree), my reaction was more of the “Well, shit,” variety. No wailing, no gnashing of teeth, no King Lear bear ripping. Just disappointment, like the ending of Spaceballs. The apes see the remaining Space Balls climbing from the nostrils of Mega Maid, and exclaim, “Oh shit. There’s goes the planet,” or something of that nature–forgive me, it’s been awhile since I’ve seen the flick. This is the sentiment I felt this morning.

Except, I don’t think the country is done for. We are definitely in for some dark days, and there’s most likely some things that will go down over the next four years which will have long-lasting and dangerous ramifications, but I don’t think it’s the end. Lots of folks talked about moving to Canada. I may have uttered these words myself earlier in the election. Some of my west coast friends and acquaintances suggested the west coast secede from the rest of the country (said in mostly jest, I’m sure). And while these seem like viable options right now, they’re wrong.

I listen to a handful of Kevin Smith’s podcasts, and Smith–quoting a proverb–regularly states that he would “much rather light a candle than to curse the darkness.” Generally, he’s referring to the act of creating, whether that’s writing, filmmaking, or podcasting. That is, instead of sitting around lamenting about how shitty things are, get of your ass and act. Do something. Make something. Be something that’s not shitty. 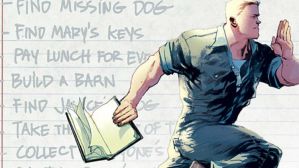 I’d heard about it awhile back, but had never picked it up. A student of mine bought volume one, and after reading it, loaned it to me (small act of kindness). Whether you’re into comics or not, I’d recommend you read it. It’s about a simple-minded fellow imbued with super-strength, named Huck, who lives in a small town, and spends his time doing one good deed each day. Simple premise, but it works quite well. Millar said he created the book in response to the darker trend in comics and superhero flicks, like Man of Steel (a trend he admitted to contributing to with his Kick Ass series). He wanted to show a positive superhero. I read it in a night and was ready for more. It works as a one off, but I do hope Millar and artist, Rafael Albuquerque, continue to add to the story.

So continue being kind to one another. Continue being an ally for one another. Smile at each other. Say “Good morning.” Hold doors open. Let someone go in front of you at the grocery store. Let drivers merge into your lane. Read as much as you can. Read to your kids as much as you can. Educate yourself. Educate others. Keep dumping little bits of goodness into the world. Make your communities a better place.

Ryan L. Purdy is a literacy and data specialist, biscuit enthusiast, and a wizard of huzzahs. He resides in central Minnesota with his wife, their three children, and a couple of dogs. He earned an MFA in Creative Writing from Augsburg University, and his work has appeared in Talking Soup, Barstow & Grand, and Volume One. View all posts by RLPurdy

4 thoughts on “Election: The Aftermath”